In high school, I had a friend from band who was a year ahead of me. My junior year, his senior year, we would pass each other in the hall almost every day between fourth and fifth period, and almost every day he’d stop to give me a hug. He wasn’t more than a few inches taller than me, but he was strong, so when he wrapped you up in a hug, you felt safe, protected, loved. (I also had a low-key crush on this friend for most of the time we knew each other, which was the other reason I loved this daily ritual.)

So almost every day I’d get my hug, and ask “How are you?” And almost every day, he would respond, “I’m Black, but that don’t matter.” I couldn’t understand why this was always his answer. I thought he was being funny. Most days I would laugh. Sometimes I would say, “If it doesn’t matter, why’d you say it?” — to which he’d shrug and walk on. Only in the last few years have I begun to understand why he said that every day, and to be ashamed of myself for being so clueless as to laugh.

He may indeed have been making a joke, but he was also naming the fundamental problem with our (my) we-don’t-see-color, race-doesn’t-matter, racism-is-always-blatantly-obvious upbringing. He was Black. Of course that mattered. To some people, it was and would continue to be the only thing about him that mattered. “Why bring it up?” I’d ask him. As if he would have the time or inclination to explain the non-stop abuse of racist infractions big and small to which he was subjected every day as a Black male teenager growing up in a post-Jim Crow South, where White people were doing their damndest to pretend the last 400 years never happened. My laughter and dismissal merely reinforced that I was completely oblivious to the White supremacy I’d been raised up in.

I am not telling this story because I am now A Good White Person Who Gets It. I’m telling this story because when I realized how much I screwed up that interaction, not just once but every day for an entire academic year, I was too ashamed to talk about it or even really think about it for a long time. In fact I avoided thinking about any of the many times in my life I’ve perpetrated racism. I allowed my guilt to keep me silent, even in conversations with myself. By not confronting my own racism, I let myself believe that I was a Good White Person. How many of you White folks reading this can relate? Every one of you has memories of your own that shame you, that you avoid thinking about because it makes you uncomfortable. And you probably think that you’re the only one.

We are programmed from the time we can talk to not talk about these things to avoid embarrassment. But our silence and our shame is what keeps White supremacy so strong. The system needs us to stay silent in order to maintain its charade of invisibility, like the Wizard of Oz hiding behind his curtain. But our avoidance and denial of our own racism only perpetuates the problem. White silence is White violence.

I know that posting this piece at all risks re-centering my own White voice, drawing sympathy for myself instead of for the cause. I do want to be clear that I do not expect forgiveness, from this particular friend or any of my other Black friends, because I am not owed the forgiveness and trust of Black people. If you, dear White reader, are tempted to pat me on the back for doing the bare minimum of owning up to my mistakes, DON’T. Instead, use that energy to go read one of these pieces generously written by Black people about (anti-)racism, and/or donate to Black Lives Matter, and/or join a protest against racist police brutality near you. And don’t expect anyone to pat you on the back for those efforts, either.

It is important for us White people to know that no one doing anti-racist work is alone in these uncomfortable feelings, but also that our discomfort is NOTHING compared to the discomfort of existing while Black or as a person of color in a White supremacist society. We will never heal ourselves, never repair the racism we’ve perpetrated, never achieve justice in our world, if we let our discomfort keep us from confronting and dismantling the White supremacy within ourselves. We have to be vulnerable in order to grow.

It’s time to listen to what BIPOC have been telling us for years. It’s time to do the really uncomfortable, really important work of self-examination and study. It’s time to stop expecting a pat on the back from BIPOC for every tiny step we take toward being less terrible people. It’s time to do more than just talk and actually get out in the streets, give money, call out our friends and family on their racism and be open to getting called out on our own racism. Yes, it’s uncomfortable. Yes, we will keep feeling guilty for our mistakes. But the only thing to really be ashamed of is letting that guilt prevent us from doing the hard work.

Another full-length blog post on the Greek novels and The Princess Bride?? Inconceivable!

Last week we talked about the frame narrative, historical past setting, pirate encounters and fake deaths, false identities and disguises, and the episodic plot that are all common to both this late 80s favorite and the ancient Greek romance novels. Today we finish off our comparison between The Princess Bride and Chariton’s novel Chaereas & Callirhoe with four more parallels, so settle in for some sidekicks, subplots, and melodrama: 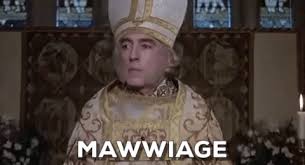 So too in our ancient novel, after Callirhoe is sold as a slave, she finds herself backed into a corner: her new master Dionysius is desperately in love with her and wants to marry her. Callirhoe wants to refuse but can’t tell him that she is already married, since slaves were not allowed legal marriages. But as she debates what to do, Callirhoe discovers that she is pregnant by Chaereas. For a female slave who had refused to sleep with her master to turn up pregnant by another man would be downright dangerous. For the safety of her child, Callirhoe has no choice but to marry Dionysius.

Eventually, of course, Chaereas finds out that Callirhoe is not only not dead, but in fact remarried; the dispute over whether she should stay with her first or second husband ends up going all the way to the Persian royal court for the Great King to decide. What could go wrong there?

Every Batman needs a Robin, and every Greek novel hero has a best friend and sidekick without whom he would never be reunited with the heroine. In Chariton’s novel, Chaereas’s best bro is named Polycharmus. Chariton says they are like Achilles and Patroclus in the Iliad, the most famous (and controversial) bromance in Western literature. Polycharmus talks Chaereas out of suicide several times throughout the novel and is even sold into slavery with Chaereas, where Polycharmus completes both their allotted portions of work each day to save the despairing Chaereas from beatings. There’s no way Chaereas’s story would have had a happy ending without Polycharmus.

Even the antagonists get sidekicks in Chariton: the Great King of Persia is supposed to settle the dispute between Callirhoe’s first and second husbands and decide who gets to keep her, but of course he finds himself falling for her beauty in the process. Although the King never actually tries anything with Callirhoe, he does send his closest advisor to talk to her and figure out if she might be open to him making a move. 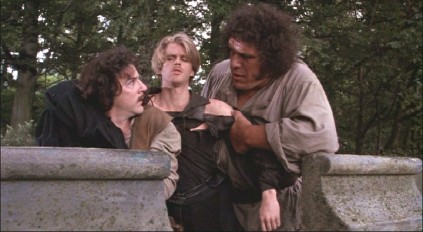 And where would Westley be without Inigo Montoya and Fezzik? Sure, they try to kill him at the beginning when they’re working for Vizzini, but when Westley is “mostly dead” from being tortured at Prince Humperdinck’s hands, it’s Inigo and Fezzik who rescue him, take him to Miracle Max for a cure, plot to help him rescue Buttercup, and carry him when he’s too weak to stand. It’s safe to say that Westley would not have been a successful hero without his sidekicks, either.

As in Chariton, the movie’s bad guy gets a sidekick too: Prince Humperdinck’s six-fingered right-hand man, Count Rugen, encourages and enables Humperdinck’s worst tendencies. Count Rugen takes Westley off Humperdinck’s hands and tortures him under the guise of research. He’s a vicious character, but you have to admit that he has Humperdinck’s back….until his own past comes back to haunt him.

Many of the Greek novels feature secondary characters with tragic pasts, but since Chaereas & Callirhoe isn’t one of them, we’ll have to turn to a different novel instead. Achilles Tatius’s novel Leucippe & Clitophon actually has multiple tragic subplots: the first is the hero Clitophon’s cousin and mentor, Kleinias. Kleinias gives his boyfriend a horse as a gift, but when the young man takes it out to ride the first time, he is thrown from the horse and killed. Our narrator actually includes the entire story of the young man’s death and Kleinias’s private lament blaming himself for giving his beloved the horse that killed him.

Later, when our hero and heroine are fleeing to Egypt, they meet a young man Menelaus, who tells them his own sob story about being held responsible for the death of his boyfriend. (Personally I think both these stories are part of the ancient novel genre’s heterosexist agenda, but that’s a discussion for another post.)

Our sidekicks in The Princess Bride have their own sad subplots as well. We don’t know much about Fezzik’s past except that he used to be “unemployed in Greenland,” which doesn’t sound like fun — though the book goes into more depth about Fezzik’s time in various fighting rings before he met Vizzini. Inigo’s 20-year quest to avenge his father’s murder, on the other hand, is a tragic subplot so compelling that he gets the most memorable line in the movie, which he says six times:

In the Greek novels and in The Princess Bride, our star-crossed lovers are periodically separated and reunited during the course of the story. After Callirhoe’s apparent death and kidnapping, and after Chaereas’s search for her results in slavery, they meet in the court of the Persian King, where they are able to see each other but not speak directly. They are separated again by the war which breaks out in Egypt, and finally reunited for good when Chaereas finds Callirhoe among his captured women and they return to Sicily in triumph.

Likewise, Buttercup and Westley are separated for five long years, during which the presumed-dead Westley goes from pirate prisoner to captain’s protégé and Buttercup gets engaged to an evil prince. They are temporarily reunited when Westley returns to rescue Buttercup from Humperdinck’s hired mercenaries, but separated again when Buttercup agrees to return to Humperdinck if he spares Westley’s life (a deal which Humperdinck does his best to break). Finally they are reunited when a recovering Westley, Inigo, and Fezzik storm the castle, rescue Buttercup, and ride off into the sunset.

There you have it, friends: definitive proof that The Princess Bride and Chaereas & Callirhoe are basically the same story. I genuinely believe that if more classicists realized this fact, more of them would be studying and teaching the novels. Seriously, what better way to get students interested in ancient literature than assigning them to watch movies like The Princess Bride and Ladyhawke as homework?? You heard it here first, people. If you need me I’ll be designing my future undergrad course on the Greek novels and 1980s fantasy-romance movies.