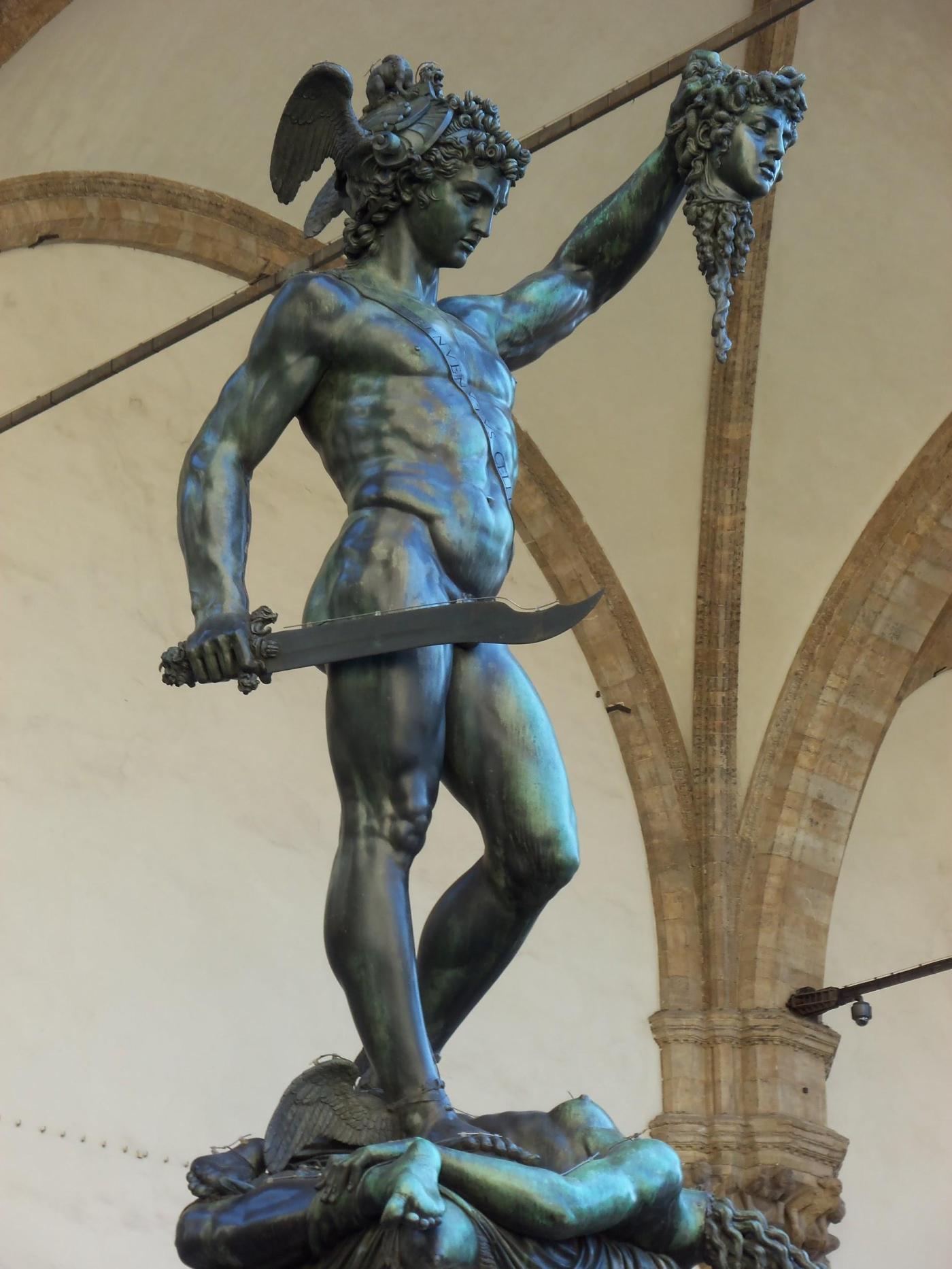 Most of you have probably heard by now about Medusa with the Head of Perseus, a 7-foot statue that was recently installed outside the courthouse in New York City where Harvey Weinstein was convicted of sex crimes. And if you’ve heard of the statue, you’ve also heard a myriad of interpretations of it, because WOW do people have strong opinions about this. For some survivors of assault, the sculpture is cathartic and empowering both in its content and its current display context. Others see its simple “flip the script” narrative as everything that is wrong with art. Some folks are angry that Medusa is conventionally pretty.

Though its fame is recent, the sculpture was completed back in 2008 by Luciano Garbati. The work existed in relative obscurity until 2018, when it was hailed as “a symbol of feminist rage” and thus closely tied (by the media) to the rise of the #MeToo movement in the popular consciousness. I will say that my initial split-second reaction was basically triumphant feminist rage. But my next-second reaction was more like, “Wait…where’s her vagina? WTF kind of feminist symbol is a Barbie vagina?!” So, a different kind of feminist rage. And one in which I’m not alone, though it is amazing to me how many people are more angry about Medusa’s nudity than they are about her anatomically incorrect nudity. Garbati went to so much trouble to make the breasts and figure realistic; are vaginas really so offensive that he couldn’t continue the realism there?

The statue’s rise to fame alongside the Me Too movement and its current placement in Lower Manhattan have caused many people to misinterpret the statue as a symbol of Me Too. But it is not at all symbolic of Tarana Burke’s Me Too movement, and attempts to say otherwise are misguided and misinformed about both the sculpture’s place in art history and the true purpose of Me Too.

Ultimately, whether you like Garbati’s sculpture or not, its artistic choices, its current display location, and the attempts to connect it to a movement that was not the actual context for its creation combine to make this an excellent example of why displays of public art really need to be accompanied by good labels to give context. Maybe then, at the very least, people wouldn’t be so confused about why she’s holding Perseus’s head instead of Poseidon’s.

But if you, dear reader, are one of those people confused about whose head Medusa is or should be holding, allow me to enlighten you.

The myth of Medusa is a sad one. In Ovid’s version in the Metamorphoses, Medusa was a beautiful young woman who was raped by Poseidon in Athena’s temple. Athena was furious that such an act defiled her temple. But as was usual in antiquity and all too common now, all that rage was directed squarely at the victim rather than the perpetrator. Rather than try to punish her fellow god, Athena punished Medusa by transforming her into a monstrous creature with snakes for hair whose stare would turn any living creature to stone. (Lots of people will have you believe that Medusa’s gaze would specifically turn men into stone, but the sources don’t support that. It’s just that Medusa only ever petrified men because only men were stupid enough to try to get a close look at her.)

Medusa lived in exile (in some versions, with her sisters who were also monstrously transformed), cut off from all human society forever. Rather than become an object of pity, men continued to consider her body as an object for the conquering: killing Medusa was the new object of every would-be hero. Of course her petrifying gaze conquered all of them, until Perseus came along. He managed to behead Medusa by only looking at her reflection in his shield, in which her gaze was rendered innocuous. Ovid also has Perseus kill Medusa while she sleeps, which fits the tradition when confronted with monsters (think Odysseus blinding Polyphemus), but makes him decidedly less impressive in my book. Perseus kept Medusa’s head in a special bag, since her eyes maintained their petrifying power even in death, and used it as a weapon to defeat the sea monster sent to destroy Andromeda.

The story of Perseus “defeating” Medusa and using her power to rescue Andromeda has been a popular theme in art since antiquity, even in our own times with the 1981 film Clash of the Titans and the (truly dreadful) remake in 2010. The Italian Renaissance was no exception to this, of course. More than one artist tried his hand at this theme, but the most famous version remains Benvenuto Cellini’s bronze sculpture, Perseus with the Head of Medusa, housed at the Loggia in Florence.

This work was commissioned by Cosimo I de’ Medici, a great-grandson of Lorenzo de’ Medici (the Magnificent). Cellini needed the work to make a statement of the Medici’s power over Florence, so placing Perseus and Medusa’s petrifying head in a loggia already filled with marble statues made a playful but powerful statement. Even Cellini’s method made a statement of grandeur: monumental bronze statues of the day were cast in several pieces and then put together, but Cellini took the much more difficult (and thus more impressive) road of casting the sculpture all in one piece. Cellini’s statue stands on a marble base with scenes from the story of Perseus and Andromeda on each side; figural bases were common in antiquity but not in Cellini’s time, so this was both an innovation and a nod to ancient tradition. Notice, too, that Perseus is trampling on Medusa’s nude headless corpse. Perseus is shown definitively as a conquering hero, a destroyer of monsters and protector of women and social order. (Barf.)

Garbati’s Medusa is in dialogue with art history as much or even more than it is with ancient Greek mythology. Garbati’s Medusa fits Western beauty conventions because Cellini’s Perseus fit Western beauty conventions. Medusa is nude because ancient heroes were always depicted nude, and Renaissance painters and sculptors followed that precedent. Perseus holds Medusa’s head aloft as a weapon; Medusa’s only weapon is her sword, her petrifying gaze rendered static so we who view her full in the face are not in danger. Perseus is triumphant, a conqueror who saw only a monster in Medusa; Medusa is somber, a victimized, mutilated, and outcast woman who has killed in self-defense.

Of course, Garbati’s Medusa fails to live up to its goal in a few key ways, number one being the Barbie crotch. (Why, whyyyy the Barbie crotch?!?) Although flipping the script can be a powerful method of making viewers confront their preconceived notions of gender, it is really only useful as a first step toward dismantling internalized patriarchy. Although portraying powerful women refusing to take any shit feels cathartic, we know that very little real progress can be made when women and femmes simply replicate the power structures and methods of our oppressors. In some ways this Medusa does us a great service in pointing out all the ways in which our society is still very backward when it comes to the treatment of women’s bodies, because it plays into some of those outdated cultural narratives.

Art is in the eye of the beholder. A sculpture that holds deep emotional meaning for me may mean nothing to you; neither of our feelings are invalidated by the other’s. Garbati’s Medusa is a response to and engagement with the Western art historical tradition, nothing more or less. To attempt to make her more than that, to attempt to make her represent the entire Me Too movement which is built on rejecting violence, distorts both the sculpture and the purpose of the movement.